Let’s look at one of the most influential numbers in numerology – numerology number 8. Number 8 is ruled by Saturn or Shani. The appearance of number 8 is curvy, twisted but still connected.. something like the infinity figure ∞. Probably this is to say that this number has the ability to achieve heights and anything infinite with their infinite efforts. It is also believed that this number is the balance between the materialistic and spiritual world. It is a powerful, ambitious and money-conscious number but it is also generous. It understands money as a tool. It is the leader and business person with big dreams and big plans. It is the strength and perseverance to see things through. It is the gambler, visionary, understanding, forgiving and broadminded.

Those who are born on 8, 17 and 26 of any month or if their date of birth reduces to 8 are number 8 people. The nature of number 8 can be cold and dry. He is considered the greater of fortune. The persons of this number are middle stature. Generally a narrow forehead, small eyes, thin beard, black and dark hair, broad chest and shoulders, often having poor legs. The temperament is bilious, nervous and slightly sluggish. 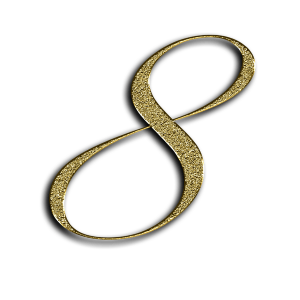 Number 8 people are invariably much misunderstood in their lives and for this reason, they feel intensely lonely at heart. They have a very deep and intense nature, great role on life’s stage, but usually, one which is fatalistic or as the instrument of fate for others. They often appear cold and undemonstrative though in reality, they have a warm heart towards the oppressed of all classes, they hide their feelings to allow people to think just what pleases them. You face constant obstacles, you struggle through every phase of your life, meet with accidents, get cheated and the fruits of your efforts don’t come back to you. Most of the time people take the benefit of all the hard work you put in.

Number 8 is a fatalistic number. The stars above govern our condition but this is more certain about number 8 persons. The stars are frequently hostile towards them and they rarely escape their wrath. This does not mean number 8 people do not possess positive luck. They are either very successful or not successful at all. There is no middle way in their case. They are very diligent and self-disciplined. Their constant nature and a profound sense of duty make them the epitome of truth and honour. They have a very intense nature ad it is rare to find a number 8 person involving in aimless frivolity.

They are not normally religious, but if they are then they become fanatics. They are wise, prudent and take a decision after great deliberation. Once the decision is taken, they put tremendous effort in order to achieve their goal. They are an inborn manager with great leadership and organizing qualities. Generally, they are not so good with their finances and always struggle to save.

As per Vedic Numerology, Number 8 relates to planet Saturn. These people are invariably much misunderstood in their lives and perhaps, for this reason, they feel intensely lonely at heart. They have very deep and intense natures, a great strength of individuality; they generally play some important role on life’s stage, but usually, one which is fatalistic, or as the instrument of fate for others.

The Positive Side of Number 8

The positive side of this number is sound judgement, productive labour, leadership, success and the best executive abilities. It is also a number associated with rising and fall in a career, changes and voyages. It makes one profound and at the same time-sensitive. When they are misunderstood by friends they take everything to their heart. They have a certain amount of eccentricity and sometimes it manifests itself in a religious plane. Outwardly, they may appear cold and detached, but they are warm at heart. They have a fantastic attitude towards a career – either very high or very low.

Their relationship with their friends, brothers and other family members take them for an indifferent person and give them a feeling of enmity against them. They generally raise quarrels with their father causing a lot of difficulty to their mother. They do not get a good return of the good deeds.

Women of this number are very wise, cunning and can be easily be-fool anybody. The love relations of these people are generally not permanent. They have to face a lot of difficulties and also a lot of struggle. They may also have a late marriage with several hindrances. Their children are usually born late (Saturn effect) and do not get full affection. Earning livelihood is a difficult task for them.

When it comes to career, Number 8 individuals choose paths that contain authority, power, status and business-oriented mind. Most 8s prefer self-established business. It is also very common to find number 8 people as law professionals, top-level management and business leadership. When it comes to taking risks, these people take a back seat. They always wish to function within the comfort zone and occupy only tried and true vocations. These are highly focused individuals and are goal-oriented. Therefore they tend to get lost in their material pursuits often forgetting their family. Therefore they must effectively balance between personal life and professional life. All your work gets abruptly blocked when it reaches the fag end. You usually get the short end of the stick. You get very little after great struggles. You have too many risks even when you hold high positions.

Professions that suite they are agriculturist, bricklayer, potter, shoemaker, navy, plumber, builder, surgery, pharmaceuticals and psychiatry. Diseases are connected to the pineal gland, liver, breathing system, blood related or urinary problems. They have the chances of suffering from depression.

You have heavy duties, which you can not shoulder. Bad Luck hangs like a sword above your head. You mostly fail. In some cases, number 8’s renounce the world and understand the scriptures very well. You give up your wealth and serve the world. But when 8 is not positive in your numerology, it makes you think of cheating, fraud, murder, hurting others and vengeful actions. They think all these thoughts but don’t get the courage to act on it.

A lot of criminals and people who are depressed are usually afflicted with an 8 4 or 7 birth or life path number.

One of The only escapes for a number 8 person afflicted by failure in marriage and career success is to get a Victory name correction. This luck of the Victory name vibration negates all that bad effects of 8.

Number 8 people really face a lot of adversities. A lucky name and a Saturn numerological yantra and a lucky stone is the only remedy for a number 8 person.

Understanding Astrology and its Ability to Change Lives

Tarot Cards and How They Influence Our Lives

Tarot Card Reading 101: Everything You Need To Know

7 Misconceptions about Numerology that Need Addressing

What if the first name adds to number 8 .. do you still think i am unlucky ..

In my life every thing gets associated with no 8. I’m number 8. From the time i was kid roll nos ranks marks mobile nos even bike no is 8. Does repeated occurrence of 8 in number 8 person’s life has a bad influence please advice .

8 can be the best or worst there is no middle way, don’t worry. Work hard, always do good and be determined and disciplined, lord Shani will always do justice.

my birth no is 1 and life path no is 8. Please suggest.

Birthday is 26th September and name is kiran kumar ramu . Please help out ! Thank you

Hey Priyanka! I’m Devesh, my birthday too is on September 26..

my birth date is 8th march please tel me my name is strong or not and which stone is suitable for me please advise .

Hi my name is Sibayan Bhattacharya and D.O.B is 26/04/1983 could please tell me whether my name is lucky or unlucky and what corrections do I need to do in my name if any????

8 no is very lucky,it is a no of responsibiliy and trust me if you are hard working and sincere after the age of 36 you will see your life changing when satrun will start rewarding you and ofcourse your dasha in your lagan chart is very important and plz check that also.

Hi My Name is Jatin V. Shah and my DOB 17/01/1964 I have lost everything and i am in great debts. Please help, i had got an appointment but because of financial problems could not make it.

hi,
I am Sarmistha Siddhacharjee DOB 26/9/1986, i want to know how will be my 2013? As I am facing a lot of financial problem in life. Am stuck in every thing. can you suggest me any help

I have been recently following maam’s program in FM and every time she tell about no 8 is ruled by Saturn in this case my DOB 08-05-1984 total 8. I have gone thru your site about 8 and I have lots of issue with myself and my life. Can you kindly guide me on how do I rectify this ??

HI,My Name Is sachin bhumkar..my DOB is 08/12/1985..so pls give me advice according to my DOB..In my life so far i am not satisfied..mostly misunderstood by others..regards..

I am a double number 8. I got my name corrected with Sheelaa and I feel it’s like a new life.

I was having so many problems at work. Soon after name correction my team lead left. And I go a great team lead. Lot of nagging people and politics disappeared. Seems like I just was driving the bad from my life.
Sort of unbeliever in such a short time.
I then went back and did remedies suggested.
I now got a promotion and another offer.

I feel all good only is happening to me after this name correction.

my name is j.murali krishna DOB is
30.10.1984. could please tell me whether my
name is lucky or unlucky and what corrections do i need to do in my name
please suggest.

my name rajesh shah dob 22.06.1966
could please advice any changes has to done in name and what stone should i wear

Plz help me about my carrier and my professional life.

I can totally relate to your analysis.
And your analysis is spot on.
Thanks for the amazing posts and the awesome tips on fever 104 and headlines today.

My son’s birth number is 21 . 09.2003 . His name is Hemanth Ganesh koteshwar. We r worried about his education. He is in 10th presently and not doing well in studies pls let us know what we can do .

My brother is very talented and hardworking still has to struggle with career.please help.Alok 26-6-86

My birth no and name comes to 8